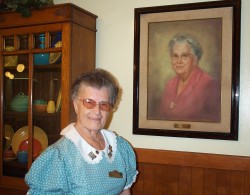 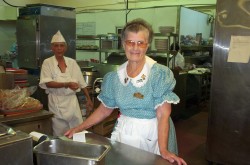 Waiting to be served at a restaurant recently, I commented to my husband: “I don’t ever want to be a waitress!”  Trying to take orders and handling demanding customers are not part of my reference set. If there’s one place where I’ve encountered angel waitresses, however, it’s at Knott’s Berry Farm Chicken Dinner Restaurant. And the leader of the pack, so to speak, was Pam Elliott. Pam wasn’t her given name, but was assigned to her by Cordelia Knott when she hired her on the spot. There was already a Linda working at the restaurant, and it was important that all the waitresses had different names, since the meal orders came down the line with one of their names on it, to signify which table it should head to. Pam was assigned to serve in the section of the restaurant just to the east of the kitchen, the narrow section that is just inside of the walkway by the Berry Market and the Bakery. It was at that station where she loyally served customers for the more than fifty years that she worked at the CDR!

Pam was always cheerful, no matter that she was raising two daughters on her own after her husband left her and she moved to Anaheim from Bakersfield. Mrs. Knott was very protective of her workers, and working at the “Farm” was like being part of a family. Pam and the other waitresses were often given leftover chicken at the end of their shifts by Mama Knott, without fanfare. In fact, Cordelia even gave away her jewelry on occasion, when someone complimented her. So you see, working there for so many years was a natural thing for Pam and others. This article published by Matt Hanlon in the OC Register gives the details of her passing. 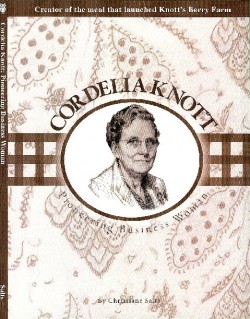 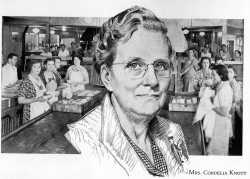 Because they were such angel waitresses, I devoted Chapter 16 of my Cordelia Knott: Pioneering Businesswoman book to Pam and the other waitresses.  Make sure to get your copy soon!

The following photo was taken at the book-signing event in November of 2009. You will notice Steve Knott standing next to Pam, Snoopy in the middle, flanked by myself plus Irv Trinkle, a longtime merchandising Knott’s employee. 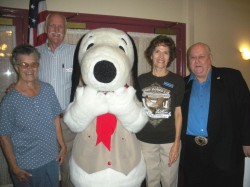