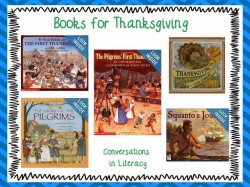 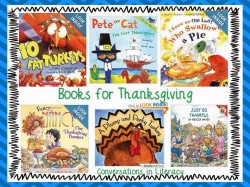 GIVING THANKS FOR THE GIFT OF READING

Giving thanks for the gift of reading, of exploring new worlds, being transported as on a magic carpet ride, to distant lands to meet fascinating people. A good book becomes a good friend. Right now might be a good time to encourage young people to make a good book their friend, as some have time off for Thanksgiving and school holidays. Rather than plunking themselves in front of that bane of a national babysitter (TV), why not challenge them to read a book and then have them report to you about it. This is exactly what famous neurosurgeon Dr. Ben Carson’s mother did, which he describes in his brilliant autobiography, Gifted Hands. He illustrates how books expanded his world through stimulation of his imagination. If your children or nieces and nephews are “stuck at home,” tell them about your favorite books that you loved when you were young, and help them see that they can travel vicariously through books. After all, Dr. Seuss said: “The more you read the more things you will know. The more that you learn the more places you’ll go,” in his book I Can Read with My Eyes Shut!  Roald Dahl, the author of the beloved book Charlie and the Chocolate Factory, wrote:   “So please, oh PLEASE, we beg, we pray, Go throw your TV set away, And in its place you can install, A lovely bookshelf on the wall.”

We’ve just finished a week in which we commemorate the Kennedy family, because on Nov. 22nd it was the fiftieth anniversary of John Kennedy’s assassination, which stunned the world.  John Kennedy’s wife, Jacqueline, suffered mostly in silence and then had to pick up the pieces, raising Caroline and little John alone.  Even before the untimely death of her beloved husband, she often had to act as both Mom and Dad for the little ones, because of the President’s many time constraints. She found that one way to guide them and lead them was through books, and was quoted as saying, “There are many little ways to enlarge your child’s world. Love of books is the best of all.”

Also leaving the surly bonds of earth on the same day in 1963 as John Kennedy, across the Atlantic in England was C.S. Lewis (novelist, poet, academic at Oxford, literary critic, and essayist, lay theologian and Christian apologist), but his death was not honored with a memorial in Westminster Abbey until this year. C.S. Lewis said, “We read to know we are not alone.” He penned the Chronicles of Narnia series, an imaginative fantasy classic of children’s literature.

On our side of the ocean, two American authors expounded about the benefits of reading. Mary Ellen Chase, an educator, teacher, scholar, and author, was heard to have said: “There is no substitute for books in the life of a child.”  And Elizabeth Hardwick (literary critic, novelist, and short story writer), stated: “The greatest gift is the passion for reading. It is cheap, it consoles, it distracts, it excites, it gives you knowledge of the world and experience of a wide kind. It is a moral illumination.” 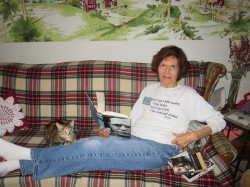 “When I get a little money, I buy books. And if there is any left over, I buy food.”– Desiderius Erasmus

So here I am, lounging during my break and wearing the cozy and comment-prone sweatshirt which my dear sister gave me. The quote thereon is by Desiderius Erasmus, a Dutch Renaissance humanist, Catholic priest, social critic, teacher, and theologian. As you can see, our kitten Anna is also very content to lounge with me. Ahhh ~ how to relax!

Lastly, I leave you with a fun quote by Groucho Marx:  “I find television very educating. Every time somebody turns on the set, I go into the other room and read a book.”